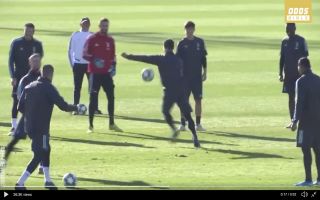 During a rondo passing drill, Ronaldo appeared to lose control of the ball which got the superstar slightly frustrated.

The former Manchester United and Real Madrid talisman picked up the football and blasted it clear, before doing the same with two other balls.

The 34-year-old certainly wasn’t angry like many would’ve thought as he appeared to be smiling after some jibes and laughter from his teammates.

Take a look a the superstar’s hilarious reaction to his slight blunder below:

When Cristiano Ronaldo makes a mistake in training, this is his reaction… ?

*pretends to be shocked* pic.twitter.com/Gz5jzsvsc9

It’s great to see a player that holds himself to such a high standard. No wonder Ronaldo’s been one of the best players in the world over the last decade.