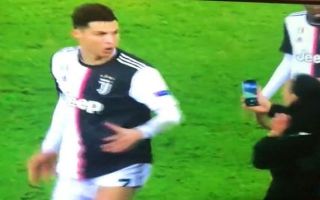 It’s been a mixed night for Cristiano Ronaldo tonight. He scored a crucial goal to get Juventus going but he’s also been subject to a couple of different pitch invaders.

The first one was tame enough, he just wanted a hug and Ronaldo looked a bit bemused and almost laughed it off.

The second one was a bit more sinister, as he races on to the pitch and grabs Ronaldo around the neck as he looks for a selfie:

Ronaldo to a fan: Are you crazy? ?#Juventus pic.twitter.com/VcPsaVX7e4

It’s easy to think of Ronaldo in the sense that he can be fragile and goes down easily, but that fan seems to forget he’s over six feet tall and built like a machine.

You can see the Juve man seriously considers thumping the guy who grabbed him, but does well to show some restraint.