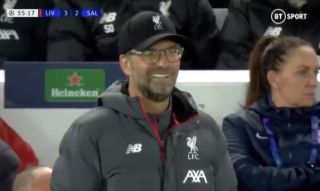 Liverpool are being strongly linked with Red Bull Salzburg star Takumi Minamino today and it’s now intriguing to see Jurgen Klopp’s reaction when he scored against the club in their Champions League clash at Anfield earlier this season.

Take a look below as the Japan international puts away a quality finish to make it 3-2 in that thrilling encounter, with Klopp seeming to smile with admiration of the player’s talent.

Of course, it’s hard to know for sure what the German tactician was thinking, but a report from the Times states he’s a long-time admirer of Minamino and that he’s now the major driving force behind trying to sign him this January.

LFC fans have already seen Minamino score a fine goal at Anfield, and they’ll be hoping it’s the first of many!