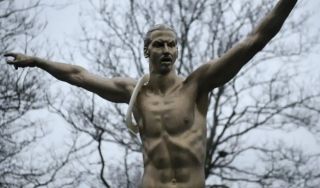 Zlatan Ibrahimovic’s decision to invest in Malmo’s rivals Hammarby continues to backfire as his statue has been vandalised again.

Last month, it was confirmed that the 38-year-old had bought 25% of the shares in the club despite his past with Malmo, and that in turn resulted in some ugly scenes.

Not only was his statue vandalised, his house in Stockholm was also targeted as ‘Judas’ was spray-painted on the front door.

While it’s unacceptable behaviour, it’s fair to say that the decision hasn’t gone down well and now the issues surrounding his statue continue.

As noted in ESPN’s tweet below, it has been damaged again as vandals tried to saw through his ankles and feet, and so a fence has now been placed around it to try and avoid further incidents.

It remains to be seen whether or not that will be enough to stop the perpetrators from doing it a third time, but from being proud of having the statue put up, Ibrahimovic is surely now going to be left bitterly disappointed that it’s being treated in such a way.

That said, it was always going to be a questionable decision to pair himself with Hammarby given his ties to Malmo, while the wait for a decision on his next club goes on as he’s set to see his contact with LA Galaxy expire at the end of this month.

Zlatan’s golden statue in Malmo has been damaged once again.

Police have now placed a fence around it after vandals tried to saw through the ankles and feet ? pic.twitter.com/4Oi4RDO1xw