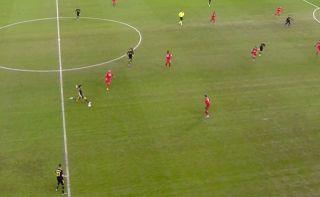 Arsenal defender David Luiz managed to get a chuckle out of the BT Sport studio on Thursday night after an ambitious effort vs Standard Liege.

The Gunners launched a comeback to secure a 2-2 draw in their Europa League encounter and that was enough to seal their place in the knockout stage of the competition.

However, Luiz thought he would try his luck early on in Belgium, and as seen in the video below, his effort from the halfway line was decent, but it never really looked like troubling the goalkeeper and going in.

In turn, speaking during the half-time break, Martin Keown, Owen Hargreaves and presenter Jake Humphrey had a good old laugh at the Brazilian’s expense as they analysed his long-range effort.

Keown conceded that he would never have been able to get away with doing something similar, but while we’ve some superb strikes from Luiz over the years, this was certainly not one of them…