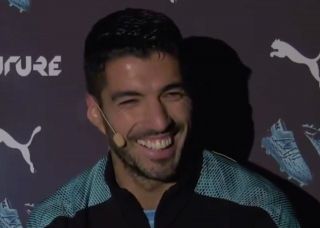 Barcelona star Luis Suarez participated in a Q&A session at a promo event this week and he had some tough topics to cover.

The stalwart has long been a key figure at the Nou Camp, and he will no doubt be a leader in the dressing room as he continues to try and fire them towards trophies this season.

SEE MORE: In-demand Barcelona starlet could have five options if he opts for January exit

As seen in the video below, he was involved in an amusing Q&A session this week, and he had a cheeky swipe at two of his teammates.

The Uruguayan stalwart was asked who had the weirdest fashion style and who would be most likely to forget their passport among other questions, and while some answers were fairly predictable, it still produced some gems for answers as he couldn’t help but crack up himself.

We’re not sure the likes of Samuel Umtiti and Ousmane Dembele will appreciate his responses, but they’ll likely see the funny side of it…