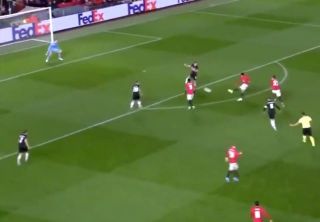 Man Utd toiled in the first half against AZ Alkmaar in their Europa League encounter at Old Trafford on Thursday, but eventually clicked into gear after the break.

Ashley Young broke the deadlock for the hosts with a smart finish after some brilliant build-up play from the Red Devils to carve the Dutch outfit open.

It wasn’t long before they had doubled their lead either, and Mason Greenwood did so in some style as seen in the video below as he placed his effort perfectly into the corner from distance to beat the goalkeeper.

There was controversy though as AZ Alkmaar thought that they should have been given a free-kick for a foul in the build-up to the goal, but the referee didn’t award it and instead one of their players was booked for his protests.

Greenwood won’t care much for that though as he bagged his fifth goal of the season for the senior side, as he looks to continue to play a key role for Ole Gunnar Solskjaer when given an opportunity to impress.

Man Utd went 3-0 up not long after as Juan Mata converted from the spot, with Greenwood again involved as he was fouled in the box to earn the penalty.

This game has come to life!

Man Utd's 18-year-old with a BULLET from outside the box to double the hosts' lead!#OptusSport #UEL pic.twitter.com/oP36hK4PC8