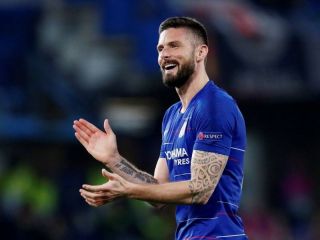 The French international has fallen down the pecking order under Frank Lampard and is now the Blues’ third-choice striker behind Tammy Abraham and Michy Batshuayi.

So far, Giroud has made only seven appearances across all competitions this season, scoring a goal against Liverpool in the UEFA Super Cup.

SEE MORE: “I would love to see him at Chelsea”- Blues legend wants €50m Premier League star at Stamford Bridge

Football.london claimed a few days back that Inter Milan and Atletico Madrid were interested in signing the 33-year-old. Now, the Mirror have reported that Crystal Palace have also entered the race to sign Giroud who is currently valued at €9million according to Transfermarkt.

The Eagles look like they could do with some better attacking options as their current top scorer of the season is Jordan Ayew who has scored only four goals in 16 appearances across all competitions.

An experienced striker like Giroud would surely be a fine addition to Crystal Palace’s squad and would almost definitely be a regular starter for them.