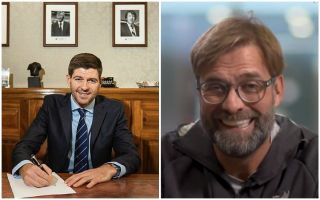 Loads of Liverpool fans noticed something intriguing about the timing of Jurgen Klopp’s new contract announcement.

The Reds boss today confirmed via the club’s official Twitter account that he’d agreed a new deal at Anfield until 2024, which will obviously go down as great news for the club’s supporters.

Klopp has been a huge success since taking over at Liverpool and it seems ideal for them to keep hold of him for as long as possible.

However, many LFC fans will be dreaming of the legendary Steven Gerrard one day replacing him, and, funnily enough, he too signed a new contract with Rangers today.

? Gerrard 2024 ?#RangersFC is today delighted to announce manager Steven Gerrard has agreed a two-year extension which will keep him at Ibrox until the summer of 2024.

Like Klopp, his new deal also runs until 2024, and many fans now seem convinced this could be deliberate as it means the timing will work well for him to then take over from Klopp at Liverpool.

Of course, a lot can happen between now and five years from now, but here’s now the news is going down on Twitter, and it’s fair to say these fans may well have a point…

Gerrard signs at Rangers until 2024, Klopp extends with us until 2024. It’s all lined up for Stevie’s return.

Steven Gerrard and Jurgen Klopp both signing new deals until 2024 on the same day.

So #Gerrard signs a new contract until 2024, then #Klopp signs a deal to take him to the same timeframe….?? #LFC

Gerrard and Klopp both sign contract extensions until 2024 on the same day. Coincidence ? #LFC #RFC

Klopp and Gerrard both sign new deals to 2024 on the same day… pic.twitter.com/1DeOCIDLt6