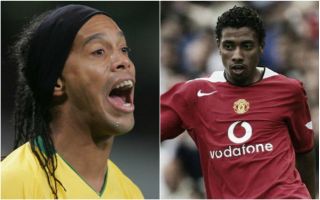 Former Manchester United ace Kleberson has explained how Ronaldinho essentially tricked him into his transfer to Old Trafford back in 2003.

The Brazilian, a World Cup winner alongside Ronaldinho in 2002, did not exactly have the best time at Man Utd as he struggled to adjust to the pace and physicality of the Premier League.

Ronaldinho, by contrast, is a footballing legend after a great career for Barcelona and Brazil, as well as at several other top clubs.

So it’s fairly amusing to see that the former attacking midfielder basically tricked one of his team-mates into making what ended up as a pretty bad move.

It’s almost comparable with how Ronaldinho would use his trickery to send defenders the wrong way on the pitch on so many occasions.

Speaking about his transfer to United in an interview with FourFourTwo, Kleberson could at least see the funny side as he recalled how Ronaldinho said that the two of them could go to Old Trafford together, before he ended up at Barca instead.

“There were two clubs interested in signing me: Manchester United and Leeds,” Kleberson said.

“It was an easy choice, but there’s a funny story about it, too. When United’s interest in me was confirmed, I was with the national team in France for the FIFA Confederations Cup. I can remember it clearly: I was with Ronaldinho and his brother/agent, Assis. Ronaldinho said, ‘They want to sign both of us.’ I said, ‘OK, let’s go, then!’

“I was so glad that he would be coming with me. I went back to Brazil and kept negotiating with United, but then Ronaldinho fooled me and went to play in the warm weather at Barcelona! He sent me to Manchester.

“That’s a joke between us until today. He knows that he owes me one.”