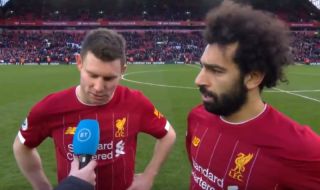 James Milner has explained that the weather affected Liverpool’s game against Watford in a scrappy win in today’s early Premier League kick-off.

The Reds were far from at their best but did just enough to come away with another three points following a 2-0 victory at Anfield.

James Milner and Mo Salah give their FT thoughts ? pic.twitter.com/Ze6dXjSind

Speaking to BT Sport after the game in the video clip above, Milner said the windy weather meant Liverpool ended up playing more long balls than they would’ve liked.

This would also have affected the quality of the passing, but he is of course right to point out that it’s the same for both teams.

Still, winning ugly is what champions sometimes have to do and LFC did that today to give further example of their title credentials.