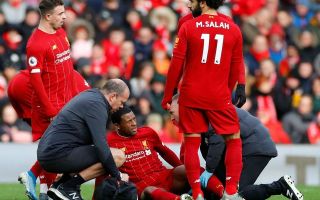 The Reds will be participating in this competition over the next week, with their semi-final coming up on Wednesday 18th, and then the final on next Saturday the 21st if they reach it.

MORE: Video: James Milner explains why Liverpool had to change their approach against Watford

However, according to journalist Sam Matterface in the tweet below, Klopp does not believe Wijnaldum will be able to play a part in the competition after going off injured in today’s 2-0 Premier League victory over Watford.

LFC fans will have to hope the Netherlands international can return to action soon, as he’s been a real unsung hero for the club in recent times.

Wijnaldum is now arguably up there with Liverpool’s most important players, and while the Club World Cup might not be a huge priority for some, it would be a big blow if he ends up being out any longer than that.

Liverpool won the Champions League last season and then beat Chelsea in the Super Cup at the start of this campaign, so could soon pick up a third trophy in the space of just a few months.