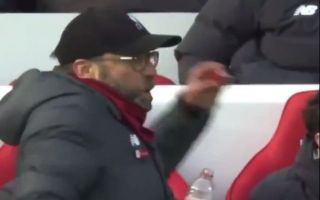 In the 79th minute of this afternoon’s Premier League clash between Liverpool and Watford, the Reds quite literally almost let their lead slip after a defensive error.

Superstar Virgil van Dijk did something completely out of character and his momentary lapse in concentration saw him pass the ball towards his own goal.

Liverpool stopper Alisson frantically scrambled back towards the net but the Dutchman’s back pass fortunately ran wide of the goal.

A clip has now emerged of Jurgen Klopp’s comical reaction to the error. The German seemed as though he couldn’t believe what he was seeing.

Take a look at the Liverpool gaffer’s comical reaction below:

Klopp’s wonderful persona doesn’t seem like it will ever change, the former Borussia Dortmund boss is often quite animated on the sidelines.

It’s great to see a manager that shows so much passion in charge of a top club.