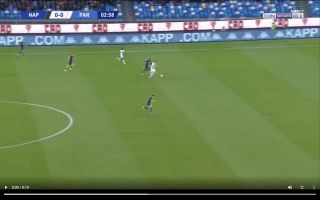 In just the 2nd minute of this evening’s Serie A clash between Napoli and Parma, starlet Dejan Kulusevski stunned the Naples outfit with a superb goal.

The talented young right winger showed off his frightening speed and power to burst past star defender Kalidou Koulibaly, the 19-year-old left the centre-back on the floor as he charged towards goal.

The ace stayed cool, calm and composed enough to fire the ball into the back of the net after his lung-busting run.

Koulibaly was actually forced off with an injury after Kulusevski’s strike.

According to the Sun, Premier League giants Manchester United and Arsenal are both keeping tabs on the £42m-rated starlet.

Take a look at the Swede’s sensational solo effort below:

? Kulusevski gives Parma an early lead after a horror show in the Napoli defence!

? A nightmare for Koulibaly, who's had to come off injured too!

??? Not the start Gattuso would have been hoping for… pic.twitter.com/xlkJrsZGcX

We’ve hardly seen any attackers do something like this to Koulibaly since he rose to superstardom in the last year. This is just more proof that Kulusevski is a serious talent.

The ace recently made his senior debut for Sweden and going off his performances so far this season, the ace could be a key player for the Blågult at the Euros next summer.

If Kulusevski can continue to pull off moments like this – there’s no doubt that a move to the Premier League could be on the cards.