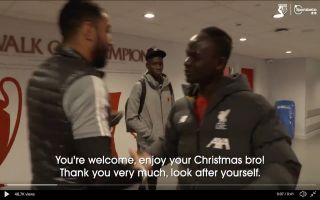 Liverpool forward Sadio Mane showed his class after his side’s 2-0 win against Watford earlier today, the Hornets’ cameras captured a heartwarming moment between the superstar, Ismaila Sarr and Troy Deeney.

Mane was talking to his Senegal teammate Ismail Sarr in the tunnel after the clash and wished Hornets skipper Troy Deeney a Merry Christmas.

This gesture was classy, but it was what the forward did after that truly shows his honourable character. Mane told Deeney to “take care of my boy” – referring to Sarr.

It’s truly amazing to see that Mane is always looking out for his teammates, the forward has shown that he’s ready to go above and beyond to help his people out.

Take a look at the lovely moment below, courtesy of Watford Football Club:

Mane really is one of the classiest guys in football, Liverpool should be honoured to have the superstar at their club.