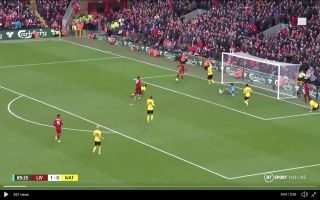 In the 89th minute of today’s Premier League clash between Liverpool and Watford, Sadio Mane cut the ball back into the path of Divock Origi.

The Reds’ Champions League hero saw his effort heading well wide of the goal but superstar Mohamed Salah showed off his clinical instincts to pull off an insane back-heel to stroke the ball into the back of the net.

Salah had already earlier opened the scoring for the Reds with a brilliant finish with his weaker foot.

Take a look at the Egyptian superstar’s amazing second strike below:

Mo Salah is there again!

The chance seemed to be gone but it's a brilliant finish from the Egyptian! pic.twitter.com/Y1YxBpzE4l

After a relatively slow start to the season – by Salah’s impressive standards – the forward is now beginning to find the net and he looks on course to seriously challenge for a third consecutive golden boot in the league.