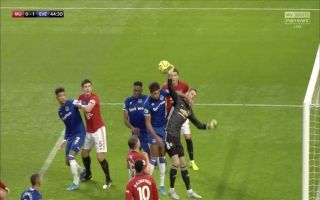 The Toffees took a shock lead against the Manchester outfit in the 36th minute of the clash when Dominic Calvert-Lewin pressured the Red Devils stopper.

The ball actually evaded both De Gea and Calvert-Lewin, with the cross flashing across goal it was turned into the back of the net by Victor Lindelof.

The Swede attempted to get out of the way of Leighton Baines’ delivery but was ultimately caught out.

Here’s what the former Red Devils star had to say on De Gea:

"That's back to de Gea's early days at United – getting bullied."

Lindelof can do nothing about it but his own-goal opens the scoring at Old Trafford!

“Baines’ delivery is wonderful, De Gea… well… that’s back to his early days at Manchester United, getting bullied by the two onrushing Everton attackers.”

“And then you have to say from a Lindelof point of view, he just doesn’t see it right til the last split second.”

“Does he get a little touch on it David de Gea? Yeah a little one, makes it a nightmare for the Manchester United defender. The goalkeeper has to punch.”

Whilst De Gea arguably should have been more commanding when attempting to clear the cross, replays of the goal seem to show that Calvert-Lewin’s contact was much more prominent than first expected.

The forward’s arm does appear to have pushed De Gea’s face away. VAR was consulted to review the goal but the officials ultimately decided that the Toffees’ opener should stand.

Some Manchester United fans may feel hard done by after this decision.

More importantly, as Neville touched upon with his comments, perhaps De Gea still needs to improve on his ability to come out and collect crosses.