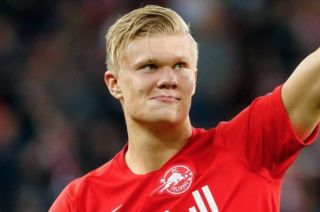 Red Bull Salzburg striker Erling Haaland is reportedly eager to clinch a transfer to Manchester United above all other potential destinations.

And according to the Daily Mirror, the young Norway international has communicated this to United manager Ole Gunnar Solskjaer ahead of the January transfer window.

It remains to be seen if this definitely means Man Utd will get Haaland, but it certainly sounds encouraging for the Red Devils.

Solskjaer could urgently do with a signing like this up front, with Haaland showing himself to be one of the deadliest finishers in Europe at the moment, and one of the most exciting prospects in the game.

It’s not been the easiest start to the season for United, with their attack often leaving plenty to be desired.

Erling Haaland wants a transfer to Manchester United over other suitors

Marcus Rashford’s form has picked up lately after a slow start, but there is surely still room for the goal threat and quality that Haaland would provide up front.

If they don’t get him, the 19-year-old will surely only end up at another super club soon enough and have a great career there.

The Mirror suggest Haaland is valued at around £80million – a potentially big fee to pay for one so inexperienced, but it could look like a bargain in a few years’ time.