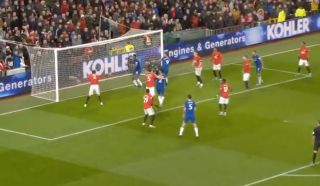 Manchester United defender Victor Lindelof has put his team behind with an unfortunate own goal at home to Everton.

Lindelof was pretty unlucky as the ball hit him and went in, with De Gea surely needing to do better to claim that initial Everton corner.

The Spaniard came out for the ball but missed it, and ultimately that’s how it ended up deflecting in off the helpless Lindelof.

The Toffees now lead 1-0 at half time at Old Trafford.