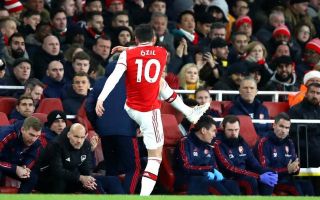 The Swedish coach saw his playmaker throw a bit of a tantrum after subbing him off in the Premier League clash at the Emirates Stadium, and has been quoted by Goal as explaining why he made that decision.

Ozil has not always been the most consistent performer for Arsenal, and had another quiet game when they needed him today.

Ljungberg seemingly shares many fans’ and pundits’ frustrations with Ozil, as he aimed a subtle dig at the former Germany international by saying he took him off because he wanted more energy in the team.

He also didn’t seem too pleased with Ozil’s reaction as he was seen kicking away his gloves, and suggested he will deal with it behind the scenes.

Ljungberg on Ozil: "He should be annoyed when he comes off." [PA] pic.twitter.com/wRnrcoVFgo

“I took Mesut off because I wanted some more energy in the team,” Ljungberg was quoted by Goal.

“How he reacts is up to him and we will deal with it later. I’m here on a day-to-day basis but of course we want players in the right way.”

Arsenal fans will surely just be generally dismayed with everything going on at the club at the moment, with their team winning just once in the last 12 games in all competitions.

A fall-out between Ljungberg and Ozil is the last thing fans need right now, so hopefully this can be dealt with swiftly and effectively.