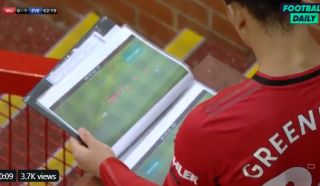 Manchester United youngster Mason Greenwood was caught studying some tactics in a folder ahead of coming on for today’s game against Everton.

A good shot from the bench provided some insight into the tactics Greenwood was looking at, but it doesn’t necessarily reflect that well on manager Ole Gunnar Solskjaer!

Greenwood going through some tactics ? pic.twitter.com/YplFFQBXvq

At one point, Greenwood flips past a page that appears to show a bunch of red dots in a line, in what some are joking looks like a very strange formation indeed.

Of course, it’s hard to know the full context of these images without a closer look, but it’s an amusing moment nevertheless.