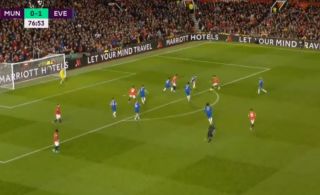 Manchester United youngster Mason Greenwood has scored another fine goal after coming off the bench against Everton today.

The Red Devils had trailed Everton 1-0 thanks to an own goal from Victor Lindelof in the first half, but super-sub Greenwood has now brought them level.

Mason "near post" Greenwood.
The accuracy that this guy has is ridiculous. pic.twitter.com/m3ly2DOzCs

Man Utd will now hope they can go on to win the game, with Greenwood clearly a huge threat in front of goal after once again making a tremendous impact.

The 18-year-old hasn’t had many opportunities this season but is really making a name for himself by doing so well whenever he does get on the pitch.