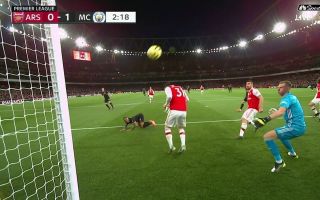 In the 1st minute of Arsenal’s mammoth clash with Manchester City this afternoon, Pep Guardiola’s men punished the Gunners on the counter-attack with Kevin de Bruyne firing the side into the lead.

Upon seeing replays of the goal, some Arsenal fans ridiculed left-back Sead Kolasinac for ducking the Belgian playmaker’s powerful effort that ended up in the roof of the net.

Some of the north London outfit’s supporters couldn’t believe that the Bosnian star was willing to battle knife-wielding robbers – but was seemingly afraid to get in front of De Bruyne’s shot.

These supporters were of course referencing the moment just before the season started that Kolasinac fought off two armed robbers who attacked himself and teammate Mesut Ozil.

Here’s what some Arsenal supporters thought of Kolasinac’s decision to duck the effort:

Kolasinac fighting off knives but ducking at the ball. Wasteman

So Kolasinac can duck man down who have knives but is scared to jump to block a shot. Shocking!

Kolasinac avoiding the ball more than he avoids assailants with knives

So Kolasinac will fight off 2 thugs with knives bare handed but ducks out the way of a football… absolutely useless.

Kolasinac – and in fact most of the Arsenal squad – can’t seem to catch a break right now. Considering how ferociously De Bruyne struck the ball, the defender’s decision was certainly the best for his health.

Nonetheless, some supporters are clearly frustrated with Kolasinac’s decision to ‘duck’ the shot. Are some Arsenal fans unnecessarily blowing this out of proportion?