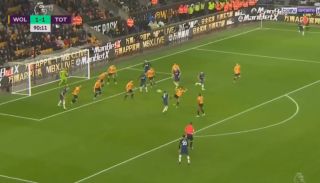 Tottenham defender Jan Vertonghen scored a fine goal late on to give Spurs a dramatic 2-1 win over Wolves.

Watch below as Vertonghen guides a smart header low into the corner, executing the shot perfectly as it gets through a crowd of players into precisely the right spot.

This is another big result for Spurs under new manager Jose Mourinho, who has had a tremendous impact since he replaced Mauricio Pochettino.

Tottenham simply were not winning tricky games like this before Mourinho came in, but now really seem to have that winning feeling and confidence back again.