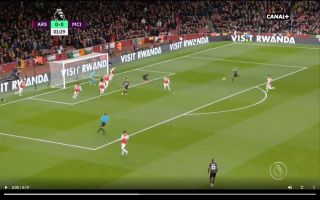 Arsenal’s mammoth clash with Manchester City got off to a flying start, Gabriel Martinelli saw his shot saved before Pep Guardiola’s men hit the Gunners on the counter following the north London outfit’s corner.

Fernandinho carried the ball out of defence before picking out Gabriel Jesus with a lovely pass, the Brazilian got down to the byline before drilling a low cross into the box.

Kevin de Bruyne made a brilliant run to ensure that he was in the prime position to hammer the ball into the back of the net with a powerful finish.

Take a look at the Belgian playmaker’s opener below:

What a goal by De Bruyne…. Arsenal will suffer today in the hand of Manchester City because of Manchester United #ARSMCI pic.twitter.com/cpSJyWlIM1

City are frightening on the counter-attack.