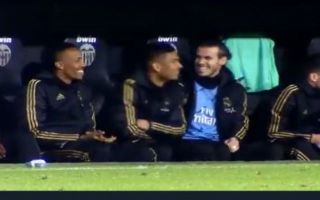 You already know that the Spanish press will have a field day with this, they love a reason to criticise Gareth Bale and this could be the latest opportunity.

Sometimes Bale doesn’t make it easy for himself, but there’s no issue with this clip here. He was spotted on the Real Madrid bench attempting the bottle flip challenge which also seemed to entertain his teammates:

Real Madrid are paying Gareth Bale £500,000 per week to do the Bottle flip challenge on the bench. ??? pic.twitter.com/HwKybbWNOA

Bale eventually came on later in the game as Real could only manage a 1-1 draw away to Valencia, and it could’ve been a lot worse if it wasn’t for a late Karim Benzema equaliser.

They will be thankful that Barcelona could also only manage to draw, meaning the Catalans couldn’t put any clear daylight between themselves and Real at the top of the table.