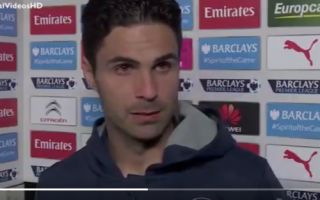 Mikel Arteta could be about to become Arsenal manager, and any fans having their doubts about him might want to take a look at his final interview during his time there as a player.

Watch below as Arteta looks clearly emotional as he speaks about his five years at the Emirates Stadium, two of which he spent as captain of the first-team.

Arteta's last interview as an Arsenal player. Talking about what Arsenal meant to him. ?pic.twitter.com/0amoR5Yf2L

The Metro report that a deal for the Spaniard to take over the Gunners could be imminent, and it’s clear the north London club means a lot to him.

While that’s not necessarily enough to make him the ideal fit as manager, it’s a decent start and can hopefully at the very least lift the mood at Arsenal after such a dismal season.