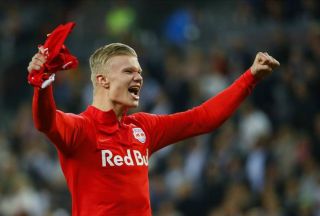 Man Utd have been heavily linked with a swoop for RB Salzburg striker Erling Haaland, and their fans appear to have been given more hope it could happen.

As noted by The Sun, it has been suggested that the Red Devils are confident of getting a £76m deal for the youngster done in January, although it could involve him returning to Austria for the rest of the season on loan.

While there has been no official word from either club as of yet, that report was quickly followed by the image below, which appears to show Haaland signing a Man Utd shirt.

There is no clear indication as to whether it is a genuine hint that he could be on the verge of completing a move to Old Trafford, as there is a serious lack of details surrounding the image.

Ultimately, there are countless potential reasons behind this, assuming that it is real, but the fans below have certainly got excited over it as they believe that it could be a huge hint that the 19-year-old is heading to Man Utd to link up with Ole Gunnar Solskjaer again.

Haaland is currently enjoying a stellar campaign as he’s bagged 28 goals and seven assists in 22 appearances for Salzburg, and so it’s no surprise that there is interest from elsewhere in trying to sign him.

However, until there is confirmation from either club, it will give the fans below more time to get excited over a possibly huge swoop from United to bolster their attack moving forward.

It’s worth noting though that many others aren’t convinced that it’s real, with many putting it down to being photoshopped. What do you think?

Wow… Haaland in the building