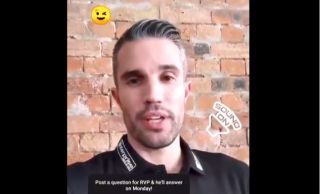 Many have made the comparison between the two players, with Red Devils youngster Greenwood looking a very similar type of forward to Van Persie.

Tall and skilful with a great left foot, Greenwood is starting to look like he could have a great Man Utd career, and it’s clear RVP rates him highly.

Watch the video above as the Dutchman tips the 18-year-old to go far due to simply copying everything about his technique.