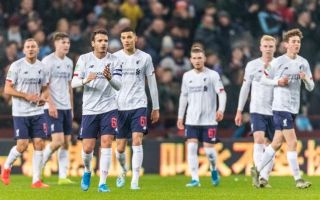 Liverpool’s youngsters did not have a good night yesterday as they were crushed 5-0 by Aston Villa in the Carabao Cup.

These were, of course, difficult circumstances for the Reds as they went to Villa Park without manager Jurgen Klopp and put out a very youthful side that was always going to struggle.

Due to the bizarre fixture schedule, Liverpool are in action again tonight in the Club World Cup semi-final, with Klopp’s first-team squad in Qatar for the competition.

Still, while it feels like it was essentially a Liverpool B team in action on Tuesday evening, the record books will show that the club suffered a heavy defeat against Villa.

And in doing so, Opta claim they actually conceded four goals in the first half of a match for the first time in over four years…

4 – Liverpool have conceded four first half goals for the first time in any competition since May 2015, against Stoke in the Premier League. Leaky. #CarabaoCup #AVLLIV pic.twitter.com/ZsmHAjLYv4

That’s not a record LFC will be too happy about, and it’s a shame for their talented young players to have been put through that.

In many ways, the scoreline was flattering for Villa, with this youthful line up holding its own and creating some decent chances for much of the game.

Fans will hope the real Liverpool can turn up at the Club World Cup now and lift yet another trophy after their recent Champions League and Super Cup success.