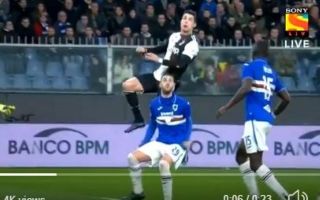 It shouldn’t come as news to anybody that Cristiano Ronaldo is decent in the air, but this was extraordinary even by his standards.

There’s a fairly regulation cross that’s floated into the area, it looks like he might be in a position to attack it but the defenders look well placed to deal with it.

Then Ronaldo looks like he’s able to defy gravity as he performs an incredible leap to tower over the defenders and he powers in the crucial goal that won the game for Juve:

We often hear the expression about someone being head and shoulders above the rest, but the defender’s head is pretty much level with his waist at one point, it shows just how incredible that leap was.

The finish wasn’t bad either, but the defenders look mystified at having to deal with some kind of superhuman effort.