This can definitely only end well for Real Madrid. They might consider themselves unlucky to not get a penalty against Barcelona tonight, but coming out after the game to blast the ref and VAR isn’t exactly applauded by the authorities.

They released a story on their official website that appears to criticise the referee and VAR for not awarding two penalties in a fairly short space of time as Raphael Varane was fouled in the box.

In some ways they have a very good point. Firstly he was caught on the thigh with Lenglet’s studs in what looked like a clear foul, while he was also hauled to the ground by Ivan Rakitic from a corner not long afterwards.

The Rakitic incident is the kind of foul that never seems to get given, but he has no intention of even defending the ball and only focuses on trying to drag his man down. 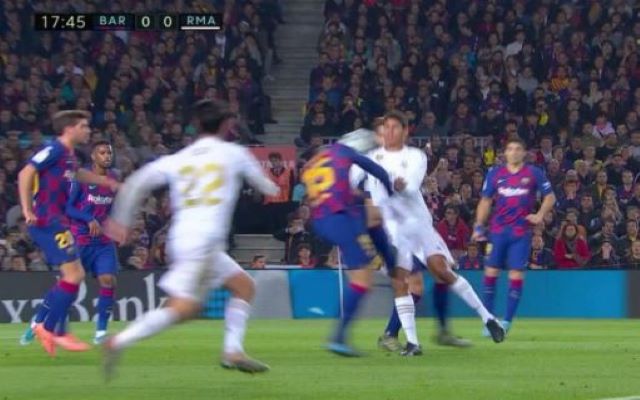 Lenglet catches Varane with his studs

Thankfully they don’t extend any criticism to the decision that saw Gareth Bale’s goal disallowed. It was a very tight decision but there was an offside in the build up so the goal was correctly chalked off.

They might consider themselves unlucky, but they should be pleased that they restricted Barcelona to very few opportunities at home.