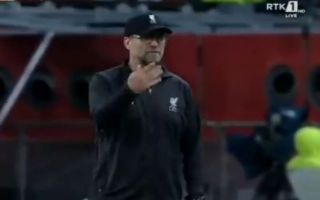 Jurgen Klopp is well liked as the generally cheery and likeable manager that he is, but it’s also important to remember that he is 6″3 and looks pretty terrifying when he gets riled up.

He’s had a run in with the Monterrey coach Antonio Mohamed after the Argentine started making demands to the referee to send Joe Gomez off. We rightfully see players get criticised for waving imaginary cards in the air, so managers shouldn’t be allowed to get away with it.

This video emerged that shows Klopp looking furious and like he wants to fight his opposite number, and it’s pretty terrifying to see:

Klopp wants a fight with their coach hahahaha?? pic.twitter.com/MdBzoXDKj9

Klopp offering out the Monterrey Manager for piping up trying to get Gomez sent off.

Thankfully for Liverpool fans, Klopp had the last laugh as a late Roberto Firmino goal won the game for Liverpool and sent them through to the final.

For what it’s worth, looking at both managers your money would have to be on the big German if a fight did break out.