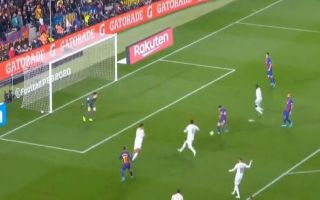 It does look like Barcelona’s main tactic is simply give the ball to Messi and let him do the rest. That’s all well and good when he’s on form, but he doesn’t look right tonight and just missed an absolute sitter.

Antoine Griezmann shows good persistence and puts the ball on a plate for the Argentine, but he lacks any kind of conviction and doesn’t manage to produce any kind of shot in the end:

It’s the kind of thing that Real Madrid would be looking to avoid at all costs, letting Messi get a shot away from the centre of the box and with no one between him and the goal, but they get away with it.

His free kicks have been hitting the wall and little flicks aren’t coming off, but you would still be foolish to write him off at this point.