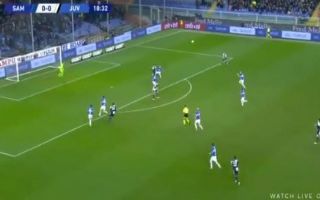 It’s incredible to think that at one point in the Summer Paulo Dybala was probably seen as expendable by Juventus. There was never any doubt that he’s an incredible player, but they just didn’t know how to use him properly.

Fast forward a few months and he’s starting to show he can play in he same team as Cristiano Ronaldo and also be a genuine game changer.

He scored this stunning volley tonight, it seems to take an age to reach him so to take it on the full volley and control the finish into the corner is lovely to see:

? A perfect cross-field ball from Alex Sandro is converted spectacularly by the Argentine

?? Juve take the lead away to Sampdoria! pic.twitter.com/WxRvd3C5hR

He’s not been overly prolific this season but some of his goals have been vital and have often proved to be the difference between winning and losing.