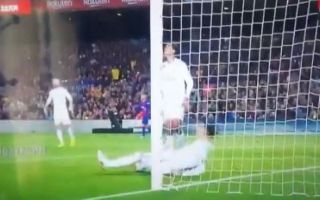 We are all used to seeing Sergio Ramos not being able to last the full 90 minutes, but usually that’s because he’s been sent off rather than picking up an injury.

He actually does incredibly well here to prevent a goal, the ball seems to ricochet off Casemiro and it fires towards his own goal. Ramos does well to sort his feet out and keep his balance to track back and clear the ball off the line:

Unfortunately he does seem to have injured his back in making the clearance and it’s not clear if he will be able to carry on for much longer. The broadcast has indicated that Eder Militao has been doing a vigorous warm up and Ramos appears to be constantly telling the bench he can’t go on.

It would be a big loss to Real, but his intervention on the goal line could be crucial.