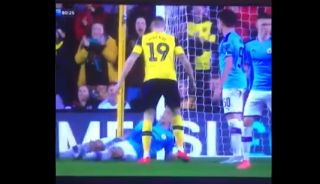 Watch below as the summer signing from Juventus, who scored in the 3-1 win away to Oxford, went down as though he’d been shot after just the slightest shove from an Oxford player.

What are Guardiolas views on diving again?

The delayed reaction to the shove really makes this, with Cancelo so obviously faking his pain as he drops to the floor.

Hopefully Pep Guardiola had a word with him about this after the game as it’s totally unnecessary and antics like this really ruin the beautiful game!