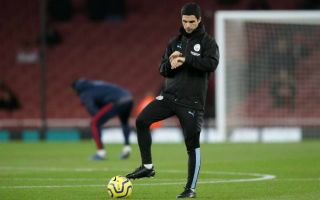 Mikel Arteta is reportedly set to be presented as the new Arsenal manager on Friday and has said his goodbyes at Manchester City.

The Spaniard has been at the Etihad Stadium since 2016 when he retired from playing and linked up with Pep Guardiola to become one of his assistants.

MORE: Arsenal postpone press conference and these fans think they know why

Arteta has become very highly regarded in his time at City and is now set to move into management himself with the Arsenal job, according to The Athletic.

It looks like the Gunners’ move for their permanent successor to Unai Emery is now very close, with The Athletic stating Arteta has said his goodbyes to the players and staff at City.

It remains to be seen how this gamble will work out for Arsenal, with Arteta yet to ever manage a game of football in his life.

The 37-year-old may well have done some fine work alongside Guardiola and the world class players at City, but the challenge awaiting him in north London looks far greater.

Still, AFC fans will hope the return of their former captain can inspire some improvement after the dire spell under the far more experienced Unai Emery.