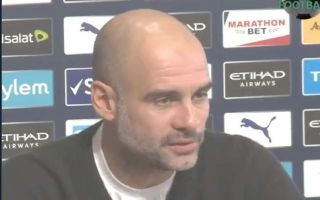 It now seems almost certain that Mikel Arteta will become the Arsenal boss, The BBC have reported he might even be announced as the manager tomorrow.

It looks set to be a fascinating appointment as he’s clearly a highly rated coach, but he doesn’t have any managerial experience and this is a huge job for anybody to take on.

If he was hoping that he might get an easy ride when he takes his Arsenal side back to The Etihad in February, he might be very much mistaken:

“I will beat him”

It doesn’t sound like Pep will go easy on Arteta when City next face Arsenal pic.twitter.com/NsPslzZmPm

Pep does go on to say that he’s only joking there but that seems doubtful in this case. He’s doing a good job of telling everyone he wishes Arteta the best and it’s easy to think he genuinely does, but a victory in that game might mean more to both men than they’ll ever let on.

No De Bruyne in Guardian's top 10 male footballers of 2019. Surely deserves to be in ahead of De Jong? pic.twitter.com/5Ofte3bk8i