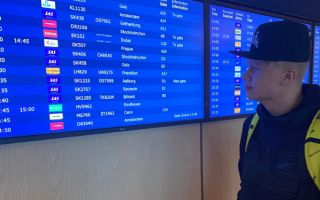 Erling Haaland’s father Alfie has tweeted an image of his son waiting at an airport in response to talk he was heading to Manchester today for talks over a transfer to Man Utd.

The young Norway international is enjoying a sensational season with 28 goals in 22 games, and has been linked with a long list of Europe’s top clubs ahead of January.

Speculation today suggested Haaland was jetting off to put the finishing touches on a move to Old Trafford, but Haaland’s dad seems to be suggesting those reports were wide of the mark.

What do you make of this cryptic tweet, Red Devils fans?