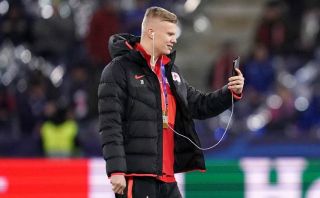 Manchester United manager Ole Gunnar Solskjaer has responded to growing transfer talk that Erling Haaland looks to be on his way to Old Trafford.

The Norway international has long been linked with the Red Devils, with the Daily Mirror recently claiming he’d informed Ole Gunnar Solskjaer that a move to United would be his first choice.

Then today, a report from the Daily Mail claimed Haaland was on a flight to Manchester for talks over joining the club as it looks like the deal is edging closer to completion.

Solskjaer himself, however, seems to be remaining tight-lipped on the matter, as he suggested he didn’t have anything to do with the player’s flight today.

“I don’t think he’s en route here, to be fair,” Solskjaer is quoted by the Manchester Evening News. “Not through me anyway!

The next superstar striker?

“You know I can’t comment on other teams’ players, I’ve said that many times and it’s one of those things in this job you get speculation a lot of the time.”

United fans will hope this is just bluffing from their manager, who will no doubt be keen not to get ahead of himself until the move is 100% official.

However, it is looking good for MUFC and fans can probably start to get excited about their club landing one of the most exciting young players in world football.