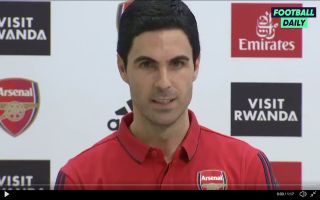 Former Arsenal captain Mikel Arteta opened his first ever press conference since being appointed as the club’s new manager by insisting that he feels he’s ‘back home’.

The Spaniard also told press that he felt a ‘good vibe’ and sensed a ‘good energy’ when he walked into Arsenal’s London Colney training ground earlier today.

See More: Arteta also had his say on Mesut Ozil during his first press conference as the north London outfit’s boss.

Here’s the Spaniard’s opening statement of his first ever press conference as Arsenal manager, courtesy of Football Daily:

?"I feel back home, It was always a dream for me" pic.twitter.com/EvArTp6GeA

“I feel back home, I’m extremely happy and proud to be given the opportunity to be the manager of this football club.”

“I’ve been preparing for a few years for this challenge to come, I know the expectations, I know the level and I know the stature of this club and what it deserves.”

“I’m ready for that challenge and I can’t wait to start working with the players and everybody here at the club.”

“I’ve got a good vide, I’m sensing a good energy today since I walked in London Colney, it’s giving me even more energy and I feel so happy.”

Arteta made 150 appearances for Arsenal during his five-year spell in north London, given his ties to the club it seems as though the retired midfielder could prove to be a great option to take the club forward.

It’s lovely to see how much managing the Gunners means to Arteta, will the Spaniard’s appointment help the side return to the top after years of mediocrity.