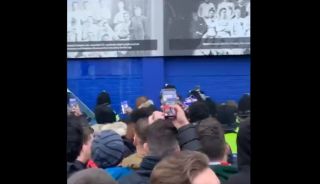 Robbie of AFTV had to be escorted by police out of Everton’s stadium Goodison Park today as protests against the fan-run Arsenal channel turned ugly.

As noted in the tweets below, various chants rang out during the game telling AFTV to get out of the club, with many supporters clearly not impressed with the kind of coverage they give the Gunners.

Robbie getting police escort out pic.twitter.com/SIO5XOn516

The YouTube channel has become very widely followed in recent years, but there are plenty of critics who think they’re overly negative about goings-on at Arsenal.

Still, it’s a shame to see Robbie seemingly needing police protection today, as some fans clearly got a bit carried away after the 0-0 draw with Everton.

Some of the ‘get out of our club’ chants can be heard in this clip, Robbie was mobbed after the match by some supporters.