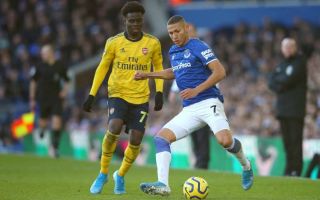 Arsenal fans did not have a huge amount to cheer about today as their side put in a pretty poor display in a generally dull 0-0 draw away to Everton.

Still, a number of Gooners seem pleased with what they saw from youngster Bukayo Saka, who was given a somewhat surprise start in a new position – left-back.

MORE: “Out of his depth” – Arsenal ace slammed for poor Everton performance by these frustrated fans

Saka has played a few times this season but has mostly been used further forward as a winger or wide-forward, but it may be that he has a future in defence.

Former Arsenal star Ashley Cole notably started his career as an attacking player in the club’s youth teams, before going on to become one of the finest full-backs English football has ever produced.

So it could be that Saka is heading towards a similar career path after a truly impressive display in difficult circumstances at Goodison Park today.

Caretaker manager Freddie Ljungberg trusted a number of youngsters by naming a youthful XI against Everton, and in truth it didn’t really work out.

Saka at left-back, however, could prove a masterstroke while Kieran Tierney is out injured, and these fans certainly liked what they saw…

Thought Saka had a really solid game. Hope he's a regular under Arteta. Works hard, scary going forward, surely has goals in his game when he matures.

Saka was excellent today, defended so well. I don’t think he has enough trickery to be a winger but he could be a world class LB.

Huge respect for Saka. Obviously not a LB but I thought he had a good game.

Saka POTM for me. He’s a lot more diligent defensively at this level than I expected him to be (way more than Kolasinac)

Saka’s been excellent at LB, a big plus. He must be staking a claim to keep the shirt even with Kolasinac’s impending return.

I'd give Saka that LB spot until Tierney comes back judging by that. ????

Bukayo saka has been impressive at left back #EVEARS