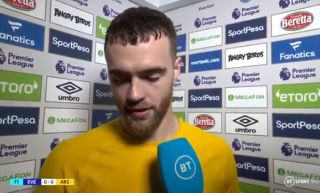 Arsenal defender Calum Chambers has revealed what new manager Mikel Arteta said to his players before today’s 0-0 draw with Everton.

The Spaniard was announced as Gunners boss on Friday but that was too late for him to fully take control of the side today, with Freddie Ljungberg remaining in the dugout for this one.

"He wants us to be brave, take responsibility and work hard for each other."

A clean sheet for Calum Chambers in his hundredth game and a message from the new boss.

Still, Chambers says Arteta spoke to the dressing room before the match at Goodison Park, and told his players to be brave and to take responsibility.

It still wasn’t the best Arsenal performance as they could only draw 0-0 in a scrappy game, but there were perhaps some positives to be taken as the team recovers from an awful recent run of form.