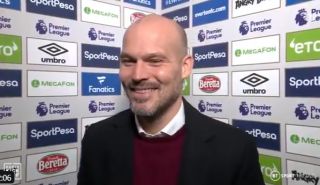 Arsenal caretaker boss Freddie Ljungberg has sent a brutal message to Mesut Ozil after leaving him out of his squad to take on Everton today.

The Swedish coach is taking charge of his final game as temporary Gunners manager, with Mikel Arteta announced as the permanent successor to Unai Emery yesterday afternoon.

"Mesut has something on his foot .. he wouldn't have been in the squad anyway after what happened in the last game.."

Another away game for Arsenal without Mesut Ozil and Martin Keown isn't impressed.

Ljungberg has taken this opportunity to get one final dig in at Ozil amid his struggles for Arsenal this season, and following his strop when he was subbed off in the defeat to Manchester City.

Speaking about his selection today, Ljungberg said Ozil had a foot problem so couldn’t play, but made the point of adding that he wouldn’t have chosen him anyway.

It will be intriguing to see how if the German playmaker has any future at Arsenal once Arteta takes full control of the team.