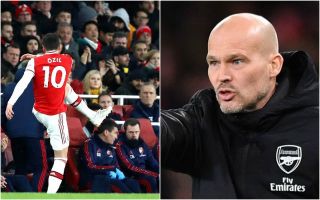 Freddie Ljungberg fired a warning of sorts to new Arsenal manager Mikel Arteta after his final game as caretaker boss.

The Swedish coach has been in charge of the Gunners for their last six matches following the sacking of Unai Emery, but Arteta was confirmed as the new permanent appointment this Friday.

One issue Arteta will immediately have to deal with is Mesut Ozil, with Ljungberg clearly not at all impressed with the German playmaker’s behaviour.

Speaking after today’s 0-0 draw at Everton, Ljungberg can be seen in the video below making a point of criticising Ozil’s attitude.

"That's not what I expect from an Arsenal player!" ?

Freddie Ljungberg insists Mesut Ozil's reaction to being substituted against @ManCity last week was 'unacceptable' and resulted in German being dropped for the draw with @Everton ? pic.twitter.com/K8fNuCC8gJ

Ozil did not feature in today’s game at Goodison Park, and Ljungberg said that was because he was injured, but that he would not have picked him if he’d been fit either.

This is because he did not like the way Ozil reacted to being subbed off against Manchester City, saying this is not how he believes an Arsenal player should behave.

The 42-year-old added that this is no longer his decision to make, but suggested it might be one Arteta could do well to think about as he prepares to take over at the Emirates Stadium.