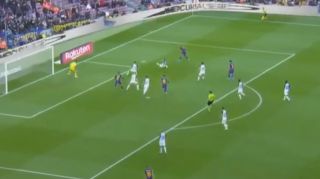 Arturo Vidal has made it 2-0 to Barcelona against Alaves today with a thumping finish after a flowing team move.

Watch below as the Chile international powers the ball home from the right-hand side, showing that he’s still very much got it despite not always being a key player since his move to the Nou Camp last season.

ESPN recently reported on Vidal’s future at Barca being uncertain, but quality moments like this surely show he’s still got something to offer Ernesto Valverde’s side.

Antoine Griezmann opened the scoring for Barcelona earlier in this game and Vidal’s strike now surely has the Catalan giants on their way to a fairly straightforward three points.