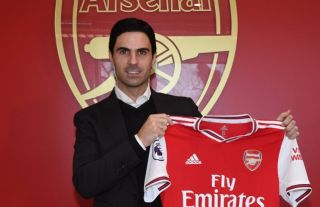 Sky Sports pundit Graeme Souness feels that Arsenal have taken a big risk by appointing Mikel Arteta as their manager.

The Spaniard left Manchester City’s coaching staff to become the Gunners’ full-time manager. Arteta’s first game in-charge of the club will be against Everton today.

Souness feels that the 37-year-old’s appointment is a huge risk taken by Arsenal due to his lack of experience. Speaking on Sky Sports, the Liverpool legend said: “Big risk. Coaching, being a very good coach, doesn’t qualify you automatically to be a very good manager. It’s two different jobs.  I would suggest Arsenal is a very different football club now to the one when he was there.

“He’d have been on the training ground most certainly with Pep all of the time, so he would have learned from him there, but it’s just the day-to-day other stuff a manager has to deal with, that he won’t have any great experience of. Whoever got the job at Arsenal would have had a very, very difficult job. The fact they’ve gone for a manager who has never been a manager before is very high risk.

“It will be no quick-fix at Arsenal, they are in trouble right now, and aren’t anywhere near where they need to be. They’re one of England’s great football clubs, but I’d suggest they’re quite a bit off that right now.”

There’s no doubt that Arteta’s lack of managerial experience will lead to many questioning his appointment. Even if he wasn’t a head coach before, there’s no denying that the Spaniard will have learned a thing or two under his compatriot Pep Guardiola while at Manchester City.

Nevertheless. Arteta will have his hands full given Arsenal’s current situation. The Gunners are currently tenth in the Premier League table with 22 points. They take on Everton at Goodison Park today and will be hoping to register a win in Arteta’s first match in-charge of the club.