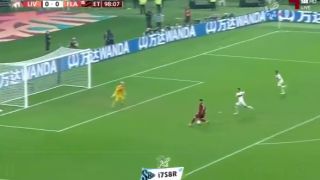 Roberto Firmino has scored what could be a crucial goal for Liverpool in tonight’s Club World Cup final against Flamengo.

Watch below as the Brazil international is put through on goal by Sadio Mane, and keeps his cool to eventually find the back of the net.

Liverpool will be relieved after a frustrating game against Flamengo, with this Firmino goal possibly now set to see them crowned champions of the world.

The Reds probably deserve it on balance, though this has been far from a classic encounter in Doha.